Starting from registration to giveaways, the I/O madness going far each year. Being sold in 20 mins this year, did not stop google to give away even more stuff. With this pace and expected release of google glass for next year, most probably next year registration will go even more chaotic! So Google, please either stop giving free stuff (I know you won't) or move to Moscone North and have a bigger I/O!

Keynotes of Google I/O is something out of this world. It is more like a rock concert than a tech conference keynote. Extending I/O to three days did not make it less compact. Usually you have at least 2 parallel sessions you want to attend and not much time left for playground and office hours but the best thing with I/O is all sessions are made available online instantly.

Android
Google is well aware of weak points of Android and doing everything to fix it. Unlike Apple who is sure on the perfection of the initial design and only making enhancements on the platform, Google can rapidly change the whole experience. The hardware buttons are gone, the options button is gone, best practices for the UI has changed a lot. Android started with as a highly flexible os and since from ICS, getting nicer and more responsive UI with each update where apple started with sleek UI but not much functionality, now adding the missing parts.
Google addressed 3 major problems of Android and did best to provide a solution.

Glass
Explorer edition is on presage and current product demos show Glass is quite near functional although Google still insists it is early development stage where Microsoft claims Surface to be complete although there are no major technical details. Google Glass can be the next revolution after iPhone. With Google Now, Google Glass will offer location and context aware interaction to your daily life. Glass can be controlled in three different ways, head movements, voice and with its touchpad. Although it is not confirmed there is a rumor on another way of control through a simple ring which would make sense since most people wear rings and a ring can offer iPod click wheel like control. Glass does not offer radio and use wifi for data. Battery life is still something being worked on although with minimal usage it can survive up to a day of usage but if you are planning to hangout while sky diving it may not survive more than few hours. It is powered by Android which would offer an easy adaption for app developers. Developer only Explorer edition will be shipping end of this year so most probably by the time of next I/O we will be experimenting the finished product. 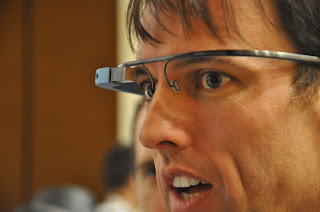 GWT
The dying rumors are over. It is clear that Google had difficult times after the GWT team dissolved. They even had hard times accepting patches since GWT is heavily used in internal projects. Google stepped back from the governance of GWT and formed a steering committee. The steering committee is a great chance to move forward and it is great to see members like Daniel Kurka who wrote mGWT.
Release candidate of version 2.5 is out and the feature set is unbelievable. Super dev mode, source maps works like magic and the compiler is much better optimized.

Google+
Google Events is smart! It was a great strategy to release it just before the I/O party in which every attendee has at least two android device.

Compute Cloud
Finally limitations of App Engine is over. Google offers cloud computing just like Amazon's EC2. With the Compute Cloud, Google can now offer a full stack of services.

Google Now
Finally the Google Now which is an integrated location and context aware service. Google Now can understand you are at work, about to leave and tell you the traffic to home or can understand you are at the airport and knows your flight from your recent searches so can guide you to your gate and even inform if there is a delay. It is amazing, mush more seamless and integrated to your life than siri.

So I/O is over and it was great,. Just wondering what will the registration be like next year since the expectations of Google Glass freebie is quite high.
Posted by Murat at 09:29 No comments: Links to this post

Well actually I was planning to write on io, android and gwt but at last I found a way to run the NexusQ outside U.S. and can't stop posting.

Here is the apk file needed to turn NexusQ into a streaming device rather than a night lamp! Well you will not still watch movies but at least youtube will work and also some of the music.

Enjoy I/O 12 attendees!
Posted by Murat at 00:29 No comments: Links to this post